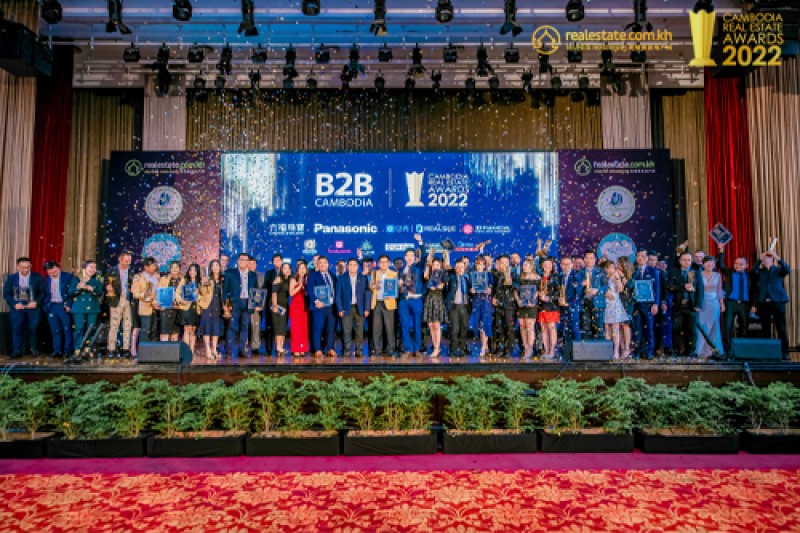 The annual Cambodia Real Awards 2022 (CREA) was held on April 7, 2022 (Thursday) at the Sofitel Phnom Penh Phokeethra. The CREA is the Kingdom’s most prestigious real estate awards that recognizes the country's finest agencies and developers. The event was organized by Realestate.com.kh in collaboration with the Real Estate & Pawnshop Regulator of Cambodia, The Ministry of Land Management & Urban Planning and the Cambodian Valuers and Estate Agents Association.

Over 500 distinguished guests from the real estate sector, as well as partner industries walked the red carpet leading to the grand ballroom of Sofitel Hotel where the gala dinner and the official announcement of winners of the Cambodia Real Estate Awards 2022 took place.

While enjoying a three-course meal and entertainment during the night, the attendees got to witness and celebrate as the winners of the Cambodia Real Estate Awards were revealed and recognised for their achievements and hard work which helped them earn the title of being leaders in the field.

Over 30 winners from the leading property developers and agencies in Cambodia were revealed throughout the night and were awarded the iconic trophy, prestigious CREA seal, and gold plaques to confirm their company's success.

Urban Hub and their development Urban Village Phase Two were awarded the Developer and Development of the Year respectively.

Whilst the biggest winners during the night included Golden Century Cambodia receiving 5 awards across their projects including Landed Property Developer of the Year for Borey Nadi as well as the Most Viewed Property for GC Orussey.

The other major winner with 4 awards during the evening was Morgan Group, receiving multiple awards representative of all of their projects including the recently completed Morgan Tower and Morgan EnMaison.

IPS Cambodia, CBRE, Knight Frank, and Century 21 Advanced Property shared the glory for the agency of the year awards. Whilst Pointer Property was awarded as the Employer of choice.

C-Hearld went home the most decorated winner in the agency categories, taking home The Agency of Choice Award for 2022 as well as the Property Management Firm of the Year.

There were also two inductees into the Cambodia Real Estate Awards - Hall of Fame 2022. Overseas Cambodian Investment Corporation (OCIC) was inducted as a developer for its 20 years plus years of contribution to the Cambodian property sector and the country as a whole. Whilst Lok Oknha Cheng Kheng, Chairman & CEO of Cambodia Properties Limited (CPL) was the first-ever individual inducted into the Hall of Fame for his 20 years plus service to the real estate industry.

In his opening remarks, Thomas O’Sullivan, CEO of Realestate.com.kh said, “I can tell you that we had more than 100 nominations this year, with over 50 entries, making this real estate award the most successful event of its kind, ever to be held in Cambodia” And, thanked everyone that took the time to put together videos and prepare entries.

The Cambodia Real Estate Awards 2022 was sponsored by Panasonic and the new nanoe™X Technology offering 24/7 protection from bacteria & viruses.